Your $25 discount has been applied!

Apartment security system that moves with you 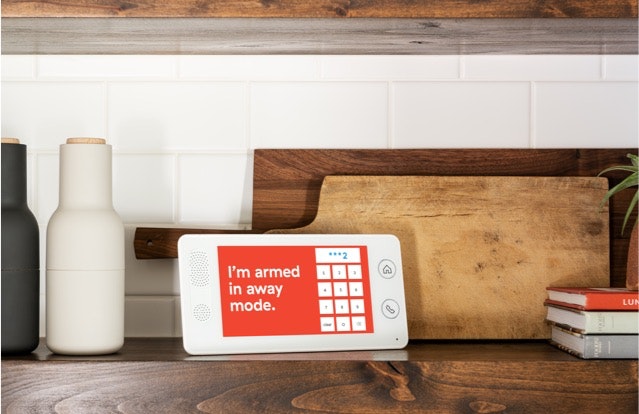 Cove's simple, self-installed security systems give you the latest security features plus live professional monitoring without contracts or holes in your wall.

Peace of mind in any neighborhood 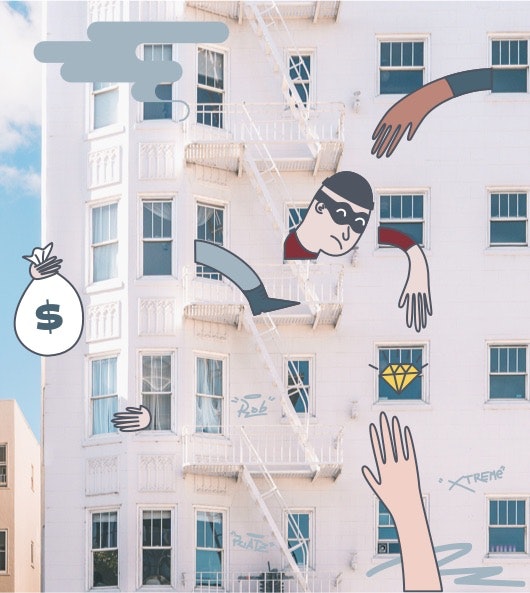 Peace of mind in any neighborhood

We know the best available apartments to rent aren’t always in our first choice of neighborhoods. Installing Cove helps you have peace of mind living in any part of town. You'll get an alarm if doors or windows are opened unexpectedly while you’re away or at home. 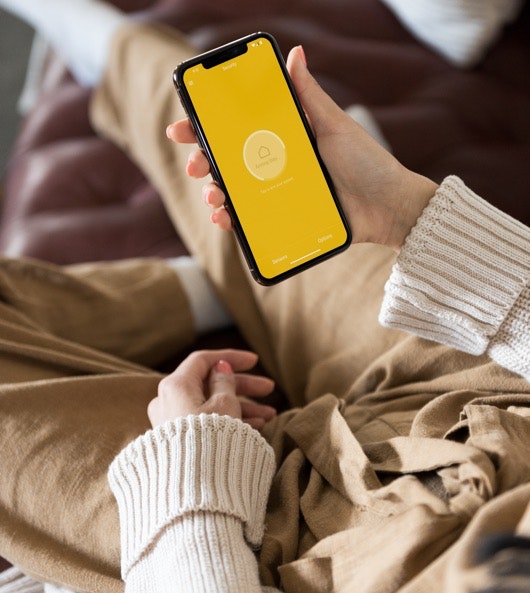 Check in from anywhere

Cove's home security apps give you mobile notifications and a live activity feed you can check from anywhere. From the gym, the coffee shop, or the office, you can check security sensors or view security cameras to easily keep up with pets, family, or visits from maintenance staff. 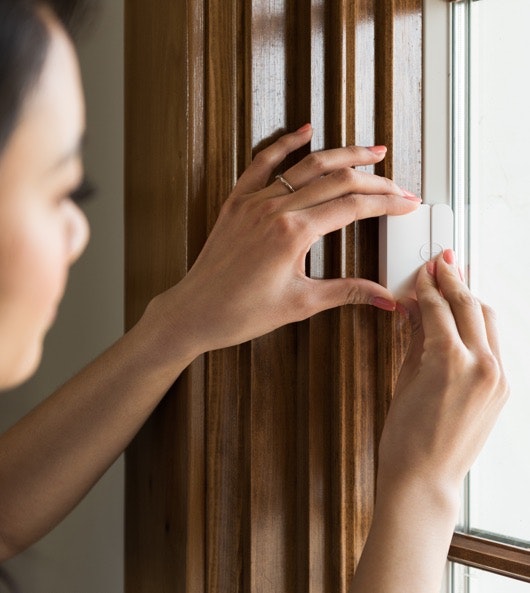 Enjoy the easiest setup with step-by-step instructions on the panel, no tools or holes required. The system is built on tamper-free technology without the hassle, so you can protect the people and things you cherish most

Choose a package or custom-build your own 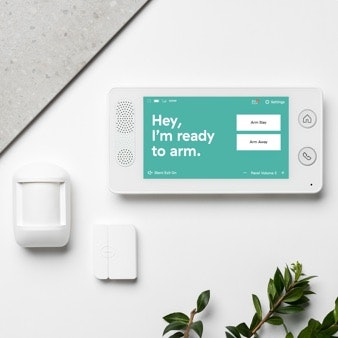 The perfect package to turn a smaller space into a little slice of heaven. 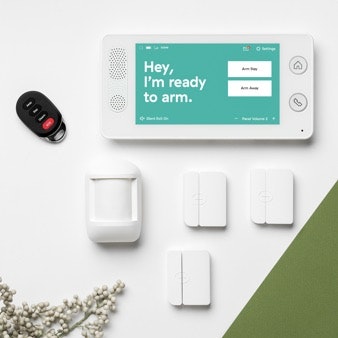 A great fit for a midsized property. Turn any living space into a home. 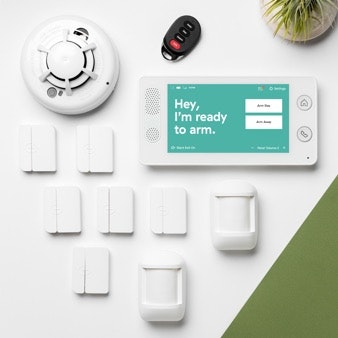 Fit for larger homes and small businesses. Made to give you the protection you need.

What are the best apartment security systems? The most effective systems? The most affordable? It can seem overwhelming to make sense of all of your security options with so many types of security systems for apartments available. In this article, we are going to unpack and explain some components of monitoring systems to help you make sense of the different types of apartment and home security systems. Choosing an apartment security system doesn't have to be stressful; we want to help make the process easy! The best time to take security measures is before you need them, so if your apartment didn't come with a high-tech monitored security system already installed, now is the time to consider setting something up. Whether you are looking for an at-home camera monitoring system or a secure system you can control from a mobile app, this article will teach you the features and benefits of apartment and home security systems that can increase your safety and peace of mind. Don't forget that it is always a good idea to make sure the alterations and installations you make are approved by your landlord if you don't own your apartment.
Types of Apartment Security Systems

Security cameras are one of the most popular accessories of apartment and home security systems, and for a good reason. Surveillance camera systems outside of your apartment door let monitoring happen 24/7. A well-placed monitored security camera can record suspicious activity, give you valuable peace of mind, and help keep you safe.
Most small security cameras can see at a range of about 10 to 30 feet. Most models also offer stunning night vision footage. With this impressive combination, security cameras make it possible to detect suspicious activity from great distances during the day or the night.
You have a lot of options when choosing a security camera, like whether you want one that is powered by battery versus electricity, one that transmits footage over a wi-fi network to a mobile app versus one that stores footage on an SD card, or if you want one that constantly collects footage versus one that films only when its motion sensor is activated. Whether you want a more traditional piece of equipment or one of the fancier smart home devices, there is a camera system out there to suit your needs.
Virtually everyone today owns a smartphone, and it isn't hard to find a wireless security camera that connects to an app. Security cameras that connect to a mobile app allow you to see what your camera sees from just about anywhere. With your app, you can have eyes on your apartment as long as you have connection to a mobile data or wi-fi network.
Security cameras can be placed wherever you would like. Typical outdoor placement for a security camera is above entryways. Typical indoor placement is in high-traffic areas and within sight of where valuables are stored. Security cameras are an important piece of an effective apartment security system. The peace of mind that comes from knowing you have a recording of anything that takes place in or near your apartment is irreplaceable.

Motion detector lights are a hands-off form of monitoring. They are a great addition to any apartment security system because every light is equipped with a motion sensor that, when activated, turns on the lights. Motion detector lights deter burglars because they literally put them in the spotlight. No intruder wants to be visible, and motion detector lights make it harder for a burglar to know what areas outside your apartment will be illuminated before they test them out themselves. The more motion sensors there are, the more lights that will turn on unpredictably.
A common misconception throughout the housing community is that leaving lights on at all times keeps intruders at bay. The light might make it look like someone is home, but it turns out that this theory is not has helpful as people originally thought. When lights are constantly turned on, it actually gives thieves an opportunity to canvas an area and locate spots that are always in the shadows. This lets intruders the chance to identify areas in the shadows where they can go undetected. Having a light with a motion sensor is one of the easiest security measures you can add to your apartment security system to keep burglars unawares while simultaneously deterring suspicious activity.

Let's take a look at the benefits of installing a security system now that you are familiar with some of the features of apartment security.

DIY home security systems like durable locks or thick blinds only go so far when it comes to protecting your belongings. For this reason, it is impossible to deny that having some form of monitored apartment security increases feelings of safety and peace of mind.
Imagine this: a thief has targeted your apartment. This thief knows that you are away on vacation, so they strike in the evening when they are less likely to be seen. If you don't have apartment security system installed, this thief is going to have an easy time getting past the locks on your doors and into your belongings. They will slip in and out without a trace.
Alternatively, if you do have a security system installed, this thief is going to have a much harder time getting inside. Say you have security cameras outside your apartment door. This thief will be recorded as they enter your apartment, as they rifle through your belongings, and as they leave.
With motion detectors installed in your apartment, you will receive a notification through your security app notifying you that there is suspicious activity in your apartment. You will be able to open up your smartphone and see if your motion sensor picked up on something you want to report. You will be able to see what is going on and know that you need to call the police.
If this thief decided to enter your apartment through one of your windows, your window sensor will loudly announce their presence. They will be unable to open or break your window without causing a scene.
If you have an alarm monitoring system installed, the thief is not likely to make it past the front door without an alarm sounding to alert you and your monitoring service that their is an intruder
How to Choose an Apartment Security System

Security companies charge a monthly or annual monitoring fee for their services. Prices vary greatly, so it is important to compare prices for the security systems that you want installed in your apartment. Make sure you are getting a fair price for the services you choose. Often times Security Companies will offer low installation costs but then lock you into a 3 or even 5 year contract that can cost upwards of thousands of dollars to cancel, so it is also important to consider contract length when thinking about the cost of an apartment security system.
Additional fees may be applied for initiation of a security contract, installation of security equipment, and for contract termination if you decide to change security providers.

Something else to consider when choosing a security system is ease of setup and installation. You can choose from systems where the security company sends someone to help you with setup and from systems where you are sent all of the equipment you need with instructions to set everything up yourself. It is ultimately up to you to decide how complex you would like your apartment security system to be.

Smart home devices have risen in popularity, but how can you be sure that a smart system is a better fit for your security needs than a traditional system?
These systems require you to download an app onto your smartphone, and they give you remote control of the system they are connected to while you have connection to a wi-fi network or can use data. Smart locks allow you to lock and unlock your doors while you are not at home. Smart cameras allow you to see the inside of your apartment while you are at work or away on vacation.
This remote access eliminates the feeling of anxiety that comes from forgetting if you locked the door before you left for the day. It also eliminates the worry of your apartment's security while you are away. If you are ever concerned, all you have to do is hop on your phone, check your app, and let your worries cease.
The decision of installing smart devices or traditional devices , but it is worth noting that smart devices offer an additional layer of control that traditional systems simply are not able to provide.The cost of smart systems is also significantly more than a DIY home security system which incorporate professional monitoring.
What Security Measures are Best for Your Apartment?

Now that you are familiar with different features and facts about apartment security systems, it is time to decide which security measures are the best fit for your space. A little bit of time and effort spent improving your apartment security goes a long way.
If you are on the lookout for an outstanding, economical, highly-rated security system, we recommend checking out Cove's security packages. The motion detectors, window and door sensors, alarm panel, and glass break alarms make it extremely easy to secure your apartment and belongings and provide you with the peace of mind that you need.