Perceptions of Safety in the 21st Century

Safety has gotten more complicated as we march toward an increasingly digital future. The safety concerns that burdened people a quarter-century ago – such as kidnapping, robbery, and violent crime – are still around, but now, we also have to worry about giving out our personal information online, cyberbullying, and our digital assistants listening in on us.

While new risks have, indeed, continued to pile up, the way we perceive those risks might not be quite accurate. Modern reporting has come under fire for sensationalizing bad news, but with 24-hour news cycles that need to be filled with attention-grabbing headlines, it’s all par for the course. Video clips that discuss negative views keep viewers engaged for twice as long as neutral content, cementing the timelessness of a classic journalistic philosophy: “If it bleeds, it leads.”

In 2019, the way people feel about safety is complicated at best, so we wanted to explore how people across generations – including parents – navigated safety in the past, present, and future. Our survey of over 1,000 Americans reveals whether people’s outlooks about life in the 21st century are sunny or pessimistic and the most prominent security concerns affecting the nation today. 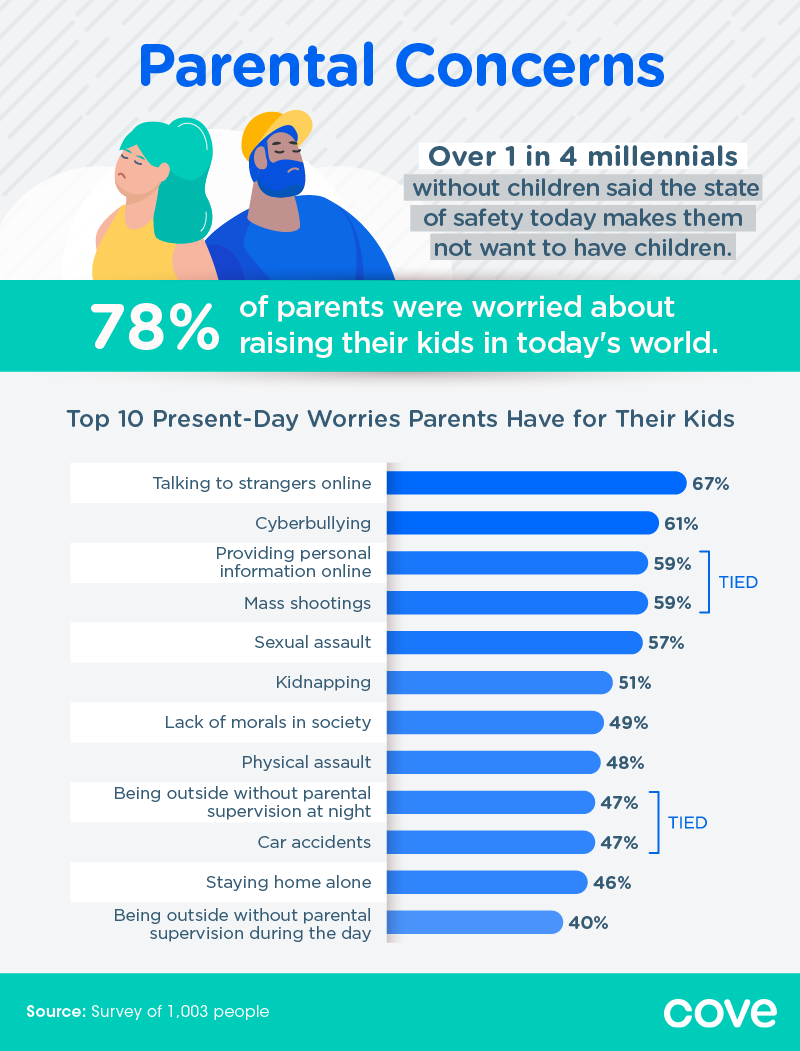 Is our world really a dangerous place? More than 1 in 4 millennials were spooked enough by the current state of affairs that they didn’t want to have children at all, and 78% of parents felt worried about raising their kids in the modern world. The most prominent concern, as named by 67% of parents, was online interactions with strangers, followed closely by cyberbullying at 61%.

One study that included middle and high school students between the ages of 12 and 17 found that over 36% had experienced online bullying at some point, and nearly a quarter had encountered mean or hurtful comments about themselves online in the 30 days prior to the study. Thirty percent reported experiencing at least one of a lengthy list of cyberaggressions (including receiving threatening texts, being impersonated online, and seeing a mean picture of them posted online) at least twice in that same 30-day period.

Giving out personal information online, mass shootings (which have been getting deadlier over the past few decades), sexual assault, and kidnapping were also prominent concerns for modern parents. 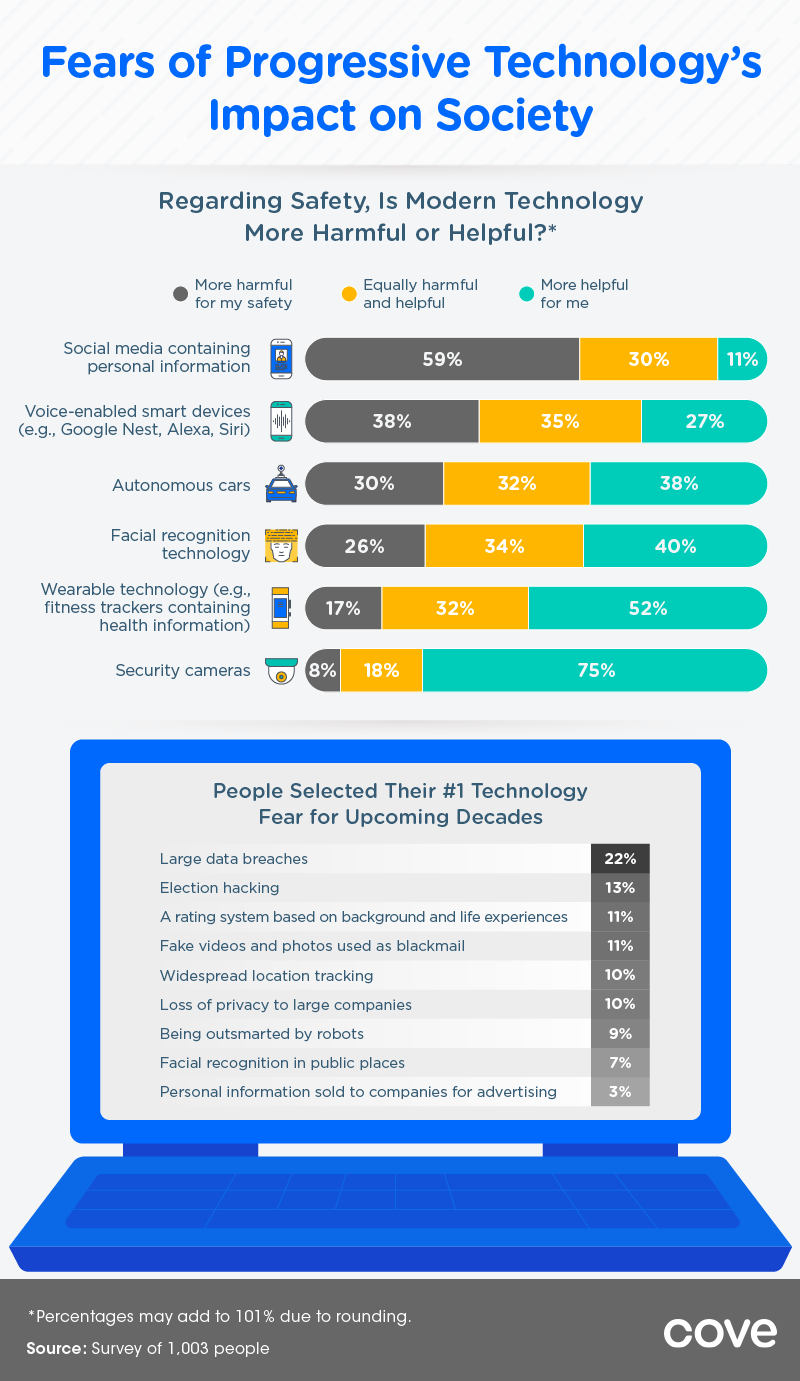 Over the past decade or so, social media has turned into a staple of our day-to-day interactions. A recent Pew Research Center study found that 68% of American adults use Facebook, and 71% of Snapchat users between 18 and 24 visit the app multiple times a day. From making online purchases to signing up for social accounts, it’s nearly impossible to avoid forking over personal information these days – and in light of massive data breaches like the Cambridge Analytica scandal, more than half of our respondents believed their social accounts were more harmful to their safety than helpful.

In fact, large data breaches were the No. 1 concern regarding the next few decades, with 22% of respondents listing it as a potential issue. Democrats were slightly less concerned about the safety of their data, at 20%, compared to 27% of republicans. In the last few years, there have been data breaches aplenty, from Equifax leaking 147 million customers’ personal information in 2017 to the Aadhaar breach in India earlier in 2019. Election hacking, rating systems for humans, and fake blackmail photos and videos also showed up on respondents’ radars for the coming decades.

Respondents were a little more balanced in their opinions of voice-activated smart devices, with 38% believing these devices were harmful to their safety, 35% saying they were equally helpful and harmful, and another 27% listing them as predominantly helpful. 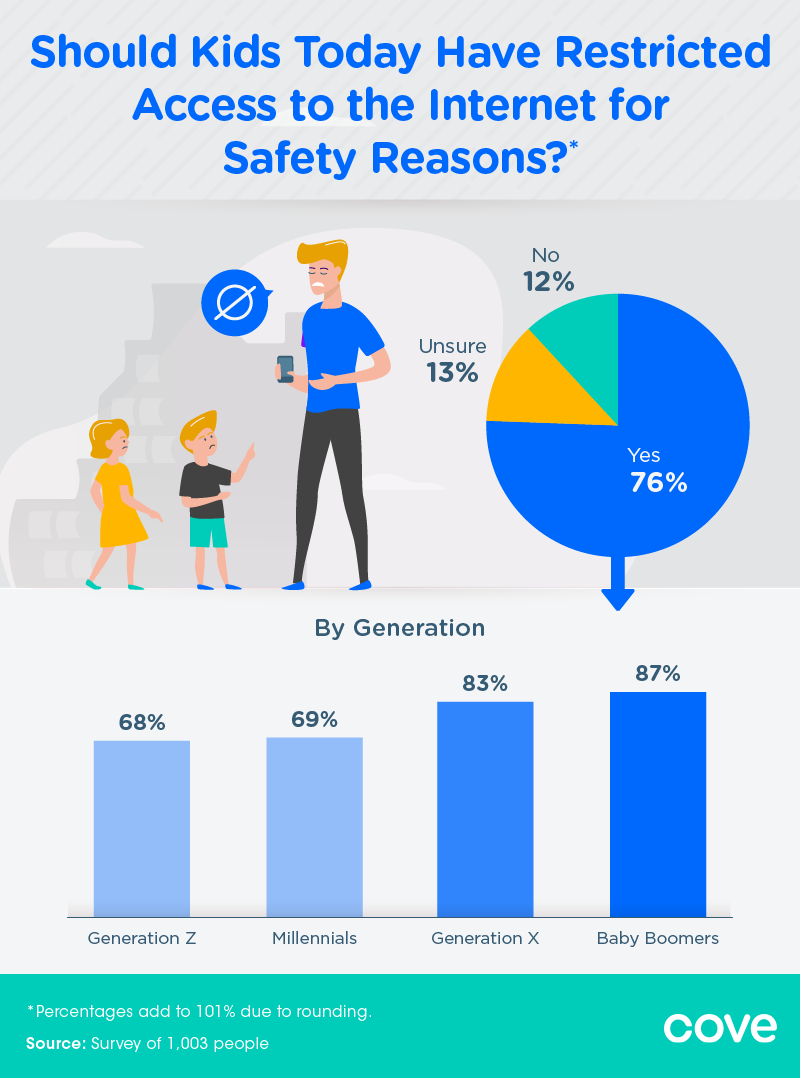 Just over three-quarters of respondents believed that kids should only have access to a restricted portion of the internet for safety reasons. Parental controls are available for parents who wish to limit the type of content their kids interact with online, on top of usage tracking and time-limiting features. Just 12% of respondents didn’t support the idea of restricting children’s access to the web, and another 13% weren’t sure.

Contrary to what some might assume, those sentiments weren’t reserved exclusively for older, less-savvy respondents: While baby boomers and Gen Xers were more likely to be on board with limited internet access for kids (87% and 83% were in favor, respectively), over two thirds of millennials and Gen Zers felt it was important as well (69% and 68%, respectively).

Finally, when the data was sliced politically, Republicans were a little more on board with the restricted internet space, with 81% of respondents in favor. Meanwhile, 75% of Democrats felt the same.

These topics will only become more relevant as time goes on, and access to digital devices among young people continues to rise. According to a recent Nielsen study, 45% of kids with smartphones got their service plan between 10 and 12 years old. 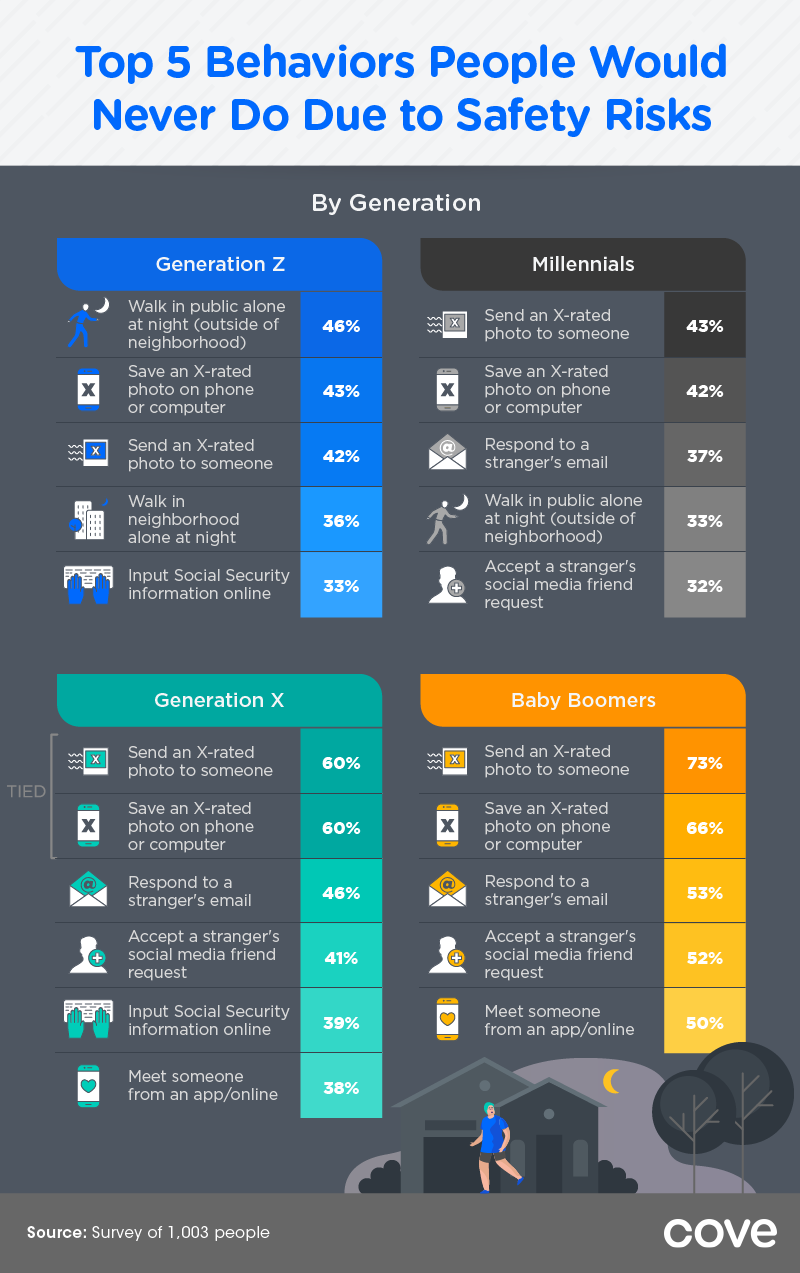 While navigating the internet comes with its own set of safety considerations, there are also many real-world behaviors that border on risky or reckless. So which ones were just a bridge too far for our respondents?

Meanwhile, Gen Zers – arguably the most plugged-in generation of the bunch, averaging five hours per day on their phones – felt most on edge about a risk that has nothing to do with the online world. Walking around in a public place alone at night, specifically somewhere outside their own neighborhood, was a behavior that 46% of this demographic wouldn’t do due to safety concerns. Second and third place went to the other generations’ picks, but in reverse: 43% wouldn’t save an X-rated photo on their phone or computer, and 42% wouldn’t send one to someone. 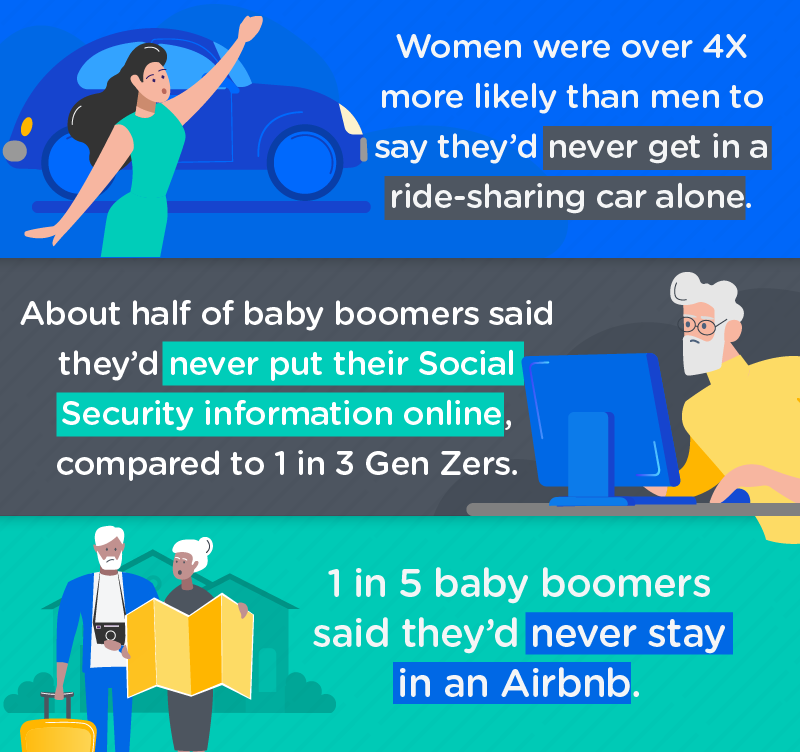 Some safety issues divided our survey’s demographic groups more than others: For example, women were much more likely to refuse to use a ride-hailing service by themselves. Baby boomers also exhibited some prudent tendencies, specifically when it came to putting their Social Security information online and staying in someone else’s home as an Airbnb.

In the United States, crime has been on a steady decline over the past 25 years: Violent crime has decreased dramatically following its peak in the ’90s, and the rate of property crime is also sliding. Despite these positive changes, the research also shows that Americans’ perceptions of how much crime is happening around them are often overblown compared to the actual statistics.

Falling into step with that trend, the majority of respondents in each generation felt less safe in 2019 compared to when they grew up. Baby boomers and Gen Xers agreed particularly strongly with this sentiment (76% and 73%, respectively), while 55% of millennials felt the same.

In fact, 2001 was the only year during which people felt more concerned about their safety compared to 2019, based on the events unfolding in America (9/11). Even though the aftermath of the most devastating event in 2001 was enough to change airport security forever, 2019 took a very close second: A quarter of respondents named 2001 as their most fearsome year safety-wise, followed by 21% who listed 2019. Democrats reported an above average rate of feeling like 2019 was their least-safe year, at 24%. Another 18% of Republicans felt the same.

Terrorism, however, was only the fourth most prominent safety concern for our respondents. Personal information being tracked online was troubling for 62% of people, followed by mass shootings (54%). Getting robbed was of concern to 46%, and terrorism worried 45% of respondents.

The fears that affected Democrats and Republicans were quite different. While those on the left were more concerned about topics like mass shootings, online hacking by foreign entities, gun laws, and cyberterrorism, Republicans were more worried about tracking of personal information online, robberies, terrorism, and a lack of societal morals (though online personal info was also their number one concern). Gun laws revealed the greatest disparity of opinion of all possible security concerns.

Stay Safe Out There

Times are changing, and according to our survey, Americans are tightening the reins on their own behavior in favor of living a safer life. Parents, in particular, expressed concern about their kids spending time on the internet unsupervised, citing strangers and cyberbullying as their most prominent worries. Meanwhile, respondents were also wary of how their data was treated by mainstays like social media and smart home devices, and large data breaches were people’s No. 1 concern for the coming decades.

No matter what’s happening out there in the big wide world, safety should always start at home. With Cove, you can protect your property like a pro: Our range of motion sensors, door sensors, window sensors, smoke detectors, 24/7 professional monitoring, and more will help you outfit your home from top to bottom. Visit Covesmart.com to browse our selection of easy-to-install devices and enjoy the peace of mind you deserve.

We used Prolific and Amazon Mechanical Turk to survey 1,003 people who were in the following generations: Generation Z, millennials, Generation X, and baby boomers. We used Prolific to gather Gen Z respondents, and we used Mechanical Turk to gather the remaining generations. We excluded the greatest generation and silent generation from our study. Therefore, all respondents were born in 1946 and later. Fifty-one percent of respondents were men, 48% were women, and less than 1% identified as nonbinary. Fifteen percent were Generation Z (18 to 21 years old); 41% were millennials (born 1981 to 1997); 30% were Generation X (born 1965 to 1980); and 14% were baby boomers (born 1946 to 1964). The average age of respondents was 37 with a standard deviation of 13 years. To be included in our final data, respondents were required to a) pass a prescreener (Prolific) or disqualifier question (Mechanical Turk) at the beginning of the survey, b) complete all survey questions, and c) pass an attention-check question in the middle of the survey. Participants who failed to do any of these were excluded from the study.

For the visualization of the years that people felt most concern for their safety, we allowed them to choose 1960 through 2019, with an option that they haven’t felt unsafe.

One of the greatest things about living in the 21st century is that it’s so easy to share things we enjoy with our friends, family, and colleagues! All we ask is that you share this content for noncommercial purposes only, and always link back to the original article so that everyone can get the full story.