Your $25 discount has been applied!

Why Smart Families Switch to Cove

Sara has had the same home security system for the past eight years. She bought it from a big home security company, and every three years, they raise the prices on her. She continues to fork over 50 dollars a month, but she starts to wonder if there might not be a better option out there.

There are a few things that Sara wants from her security system. First, it needs to work. She wants a system with reliable protection that’s easy to operate. And she doesn’t want anything too techy or complicated. Her biggest complaint with her current system is the number of false alarms she gets, but since it has highly-rated protection, she’s put up with it for a while.

While researching, Sara comes across Cove. At first, it sounds too good to be true: 25 dollars a month for professional monitoring, and a lifetime rate lock? No more price jacking every few years!

But it’s true. Thousands of reviews confirm it. They also mention things like “TripleTouch,” a system that reaches out to you via text, phone, and alarm panel to prevent false alarms. And the equipment is wireless! The reviews verify Cove’s story: that the system is easy to install, the cost is low, and the equipment works. The clincher, though, is that there’s no contract. She can cancel her system at any time.

Sara decides to go for it. She even saves extra money by installing the system herself! She couldn’t do that with her old system, but Cove is so simple that she installs it in minutes. 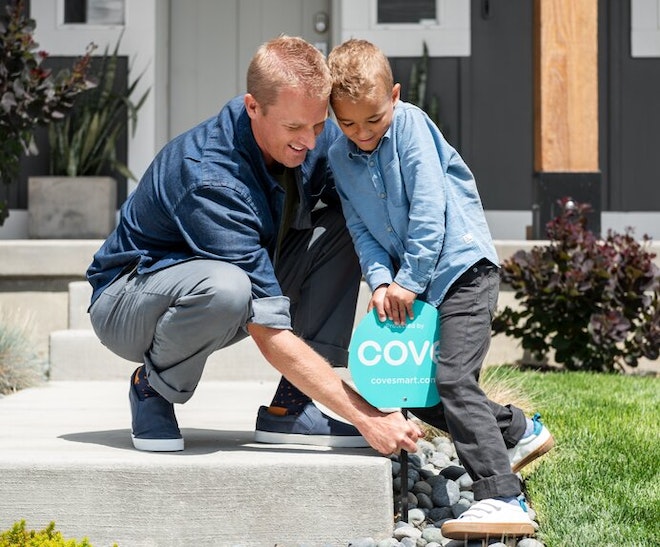 Cove recognizes that finding the right security system is a journey. That's why they provide that 60-day free trial. It's why they don't have contracts. Home security should be on your terms. So, take advantage of 60% off all equipment today!

See How Simple Cove is to Install

The Touch Screen Panel connects to our monitoring stations via 4G cellular connection. You will not need a landline or Wi-Fi to communicate with our monitoring station. Most of our sensors connect to the Touch Screen Panel via a radio connection, but our indoor and outdoor cameras do require a 2.4GHz Wi-Fi connection. We have found Verizon to provide the best coverage for our customers, but we can also ship out AT&T panels.

We’re so confident that you’re going to love your Cove system, we give you 60 days to try it out! If within 60 days, you decide it’s not working out for you, send it back for a full refund. We’ll even cover shipping costs!

No. When you sign up for a Cove monitoring plan, we’ll handle the subscription with Verizon for your system. This is completely separate from your cell phone plan. If you’re concerned about Verizon coverage in your area, you can always give us a try with our 60-day money-back guarantee.

If your power goes out, you might be alone in a dark house with no Netflix, but Cove will continue to secure your home. The Cove Touch Panel has a 24 hour backup battery to protect you against power outages.

Both of our doorbell cameras are compatible with the Cove app and provide 2-way communication with your front door, HD resolution, and night vision. But our cameras have some important differences: Kami Doorbell Camera: The Kami Doorbell Camera is a bulkier, heavier camera than the SkyBell camera. The weight is primarily due to the battery pack that powers the camera. The battery pack can power the camera on its own or connect to the doorbell wiring to maintain a constant charge. If you decide to recharge the battery, please note that it will need to be charged at least once a month. The upside of the rechargeable battery is that your home does not need to have a doorbell currently to install this camera. It can be mounted anywhere. Unfortunately, the Kami camera is not compatible with digital doorbell chimes. SkyBell Doorbell Camera: The SkyBell Doorbell Camera is a slimmer doorbell camera than the Kami camera. It does not require a battery to operate, but it must be wired directly into your current doorbell wiring. This camera is compatible with digital doorbell chimes, but it requires an adapter, which can be purchased separately through your customer portal. In terms of features, the SkyBell camera offers a slightly wider field of view and an option for color night vision which is not provided by the Kami camera.