What's A Trip Wire Alarm And How Can I Make One? 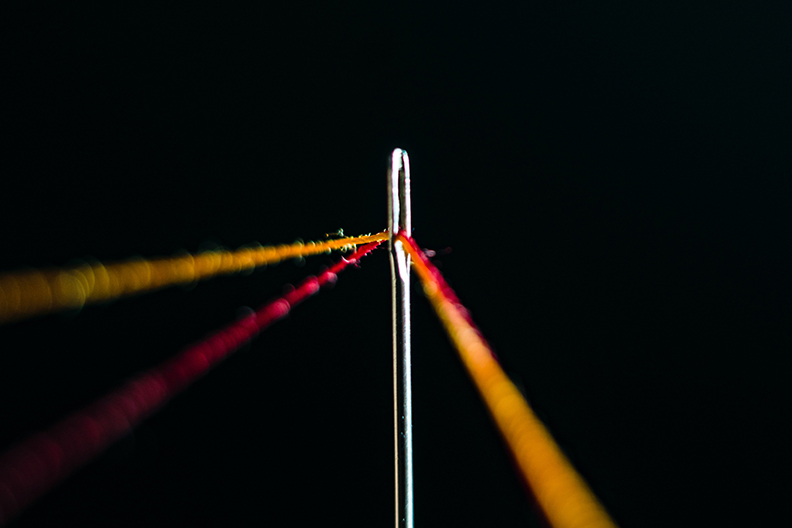 I remember as a kid, my little brother used to love playing tricks on me. One of his favorite shenanigans was to hide in a corner quietly and wait for me, the unassuming sister, to cross his path. When I did, he'd jump out and lay down in front of me quickly, causing me to tumble to the ground and start crying. He called his little game, "Tripper". Needless to say, I hated it.

So what does this little anecdote have to do with a trip wire alarm system? Honestly, more than you'd think. My brother had figured out a system (albeit using his body rather than a real wire) that has been around for over a hundred years now. He was using his body to topple me over, thus incapacitating me and making it difficult for me to get up right after I fell. All he was missing was an alarm. Although he probably didn’t want an alarm, or he would have gotten in trouble with mom.

You are probably familiar with the term “trip wire.” These simple mechanisms have been used in wartime, in hunting traps, and in security systems. The basic idea is to have something, usually, a wire (although, as you will see later, lasers can be used as well) stretched out across a path or doorway, Trip wires are attached to two fixed points, such as fence posts or trees. The tripwire should be firmly fixed in place, so that it is taut enough to trigger when a person or animal trips over it, or causes it to move at all.

The earliest trip wire systems were attached to bells instead of a modern alarm. When the wire triggered, it would pull on the bell, causing it to ring and notifying anyone nearby that intruders were in the area. These systems were also used to set off bombs when enemies encroached on home territory during WWI. Enemies approached, activated the tripwire and caused the firing pin to lose tension and go off. Despite the incredible damage these bombs did, the system was undeniably elegant. This system was also used to trigger an attack alarm, notifying soldiers to be ready to fight.

Today, trip wire alarms are much more technologically advanced. Many systems incorporate laser technology that will sound an alarm if someone were to step across the laser. That’s right, you read that correctly. Lasers. Not exactly like the rotating lasers in Get Smart or the James Bond films, because these laser systems are invisible. No glowy red lines crisscrossing all over your yard and house, just simple, understated, invisible technology.

This kind of technology has a couple of advantages:

While burglars or intruders may be a little bit less likely to run away if they can’t see the tripwire, police can be notified without their knowledge, making it easier for police to catch potential trespassers or intruders.

Invisible lasers, unlike wires, are much harder to find and disable than a more archaic trip wire alarm system

Let’s be honest, it’s pretty cool that laser technology is becoming a relevant part of home security. Technological upgrades like this mean that these kinds of alarm can be wireless and much more aesthetically pleasing. 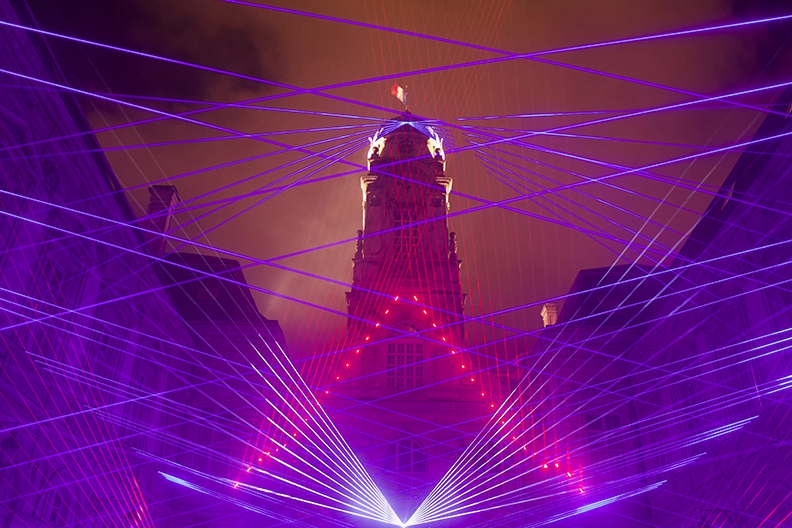 So how do laser trip wire alarms work, exactly?

Well, there are a few different components. Obviously, there are your lasers. These are created using a laser diode (a mechanism by which laser beams are produced) reflected against a light sensor. These are hooked up to a circuit board of some kind, which then talks to a computer that has been coded to do an action (whether that is to sound a buzzer, to call the police, to lock the doors, or all three). When the beam of the laser is broken, a switch will flip on the circuit board, which will then trigger the computerized response, notifying you of any intruders in the area.

Who is this technology for?

There are many uses for tripwire alarms. Most often, you’d think of them in relation to home security. A tripwire system can make for a great perimeter alarm around your home.

There are also some fairly easy do-it-yourself alarm systems that you can put up just about anywhere. YouTube is full of DIY project tutorials on how to make simple tripwire systems out of a laser pointer. These simpler systems will require a battery to power them unless you want to plug them in. They are created by setting up the laser pointer and reflecting it against a light sensor. This sensor is hooked up to a circuit board of some kind, which then tells the computer that has been coded to do something (whether that is to sound a buzzer or to send you a text message). When the beam of the laser pointer is broken, (the equivalent of someone tripping over a wire) a switch will flip on the circuit board, which will then trigger the computerized response, notifying you of any intruders in the area.

The possibilities for these are endless. If you’re in a college dorm, and you suspect that your roommates are stealing your food, set up a device in the cupboard with your food. You’ll be able to catch them in the act (I fantasized about this as a freshman). Hackaday.com offers an alternative possibility: installing one in your office space so that if someone walks in, you can act distracted. If you’re a hunter, it wouldn’t be too hard to set one of these up as a trap. Below is a video of one way to make a trip wire alarm.

If you don’t want a tripwire alarm that’s quite as technologically advanced as a laser-run system, or you don’t trust yourself to be able to code a circuit board to do what you need, you can fashion your own tripwire alarm out of some very simple elements, including fishing line, some kind of lever, and a bell or alarm.

The first thing you will need to do to set up your simple tripwire is locate the area in which you hope to set up your system. This should be in an area that you feel is vulnerable, or an area through which, you are worried that an intruder might be able to access your home. You need to have two anchor points. These points could be trees, bushes, lawn light fixtures, or for a much better system, you could use hidden stakes that you drive into the ground. Next you will stretch the fishing line tautly between the two anchor points. On one side, you will need to tie the fishing line around the stake. On the other side you will twist the line around the stake, and you can tie it as well, but be sure not to cut the line, as you will be running the line up to a bell that you anchor in a tree near a window, or on the window ledge itself. Make sure the bell is loud enough that you will be able to hear it from inside your house.

Once you have anchored the bell in place, you will tie the fishing line right above the bulge at the top of the bell. Your system is complete! Before you leave it, though, you should test it out. You will want to apply some pressure to the line. If you hear the bell ring loudly, your system should work great. If the bell only rings faintly, you will need to pull the line more taut. This should ensure that the bell rings loudly. Alternatively, you can attach the line directly to the clapper and see if that produces a louder noise.

This kind of alarm will go off no matter who crosses it, be it animal or human. If possible, you should run the line at knee-level, so many animals will be able to scamper under the line without triggering the alarm. 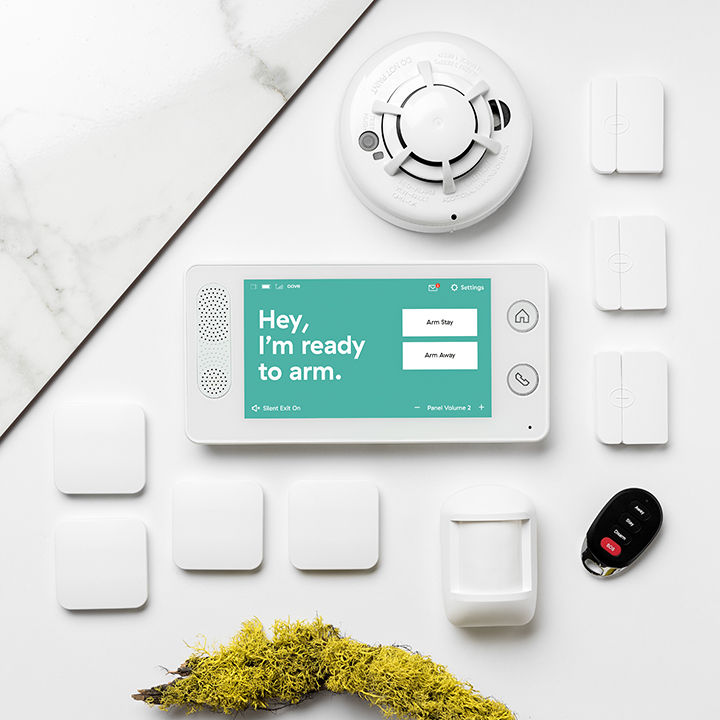 What are some other cool home security devices?

Laser security systems, while cool, are not the only way that you can protect your property from unwelcome visitors. Other gadgets are available as well. If you're a DIY kind of person, you might want to take a look at some of Cove's DIY home security system products. The idea behind Cove is simple: to enable you to install your own security system, using quality products for a great price.

Some of these products include:

So, as you can tell, there are many ways for you to secure the perimeter of your home and protect your family and valuables. At Cove, we want you to feel as safe as possible. Please take a few minutes to check us out!

And if you're interested in other creative home defense methods, check out this article.