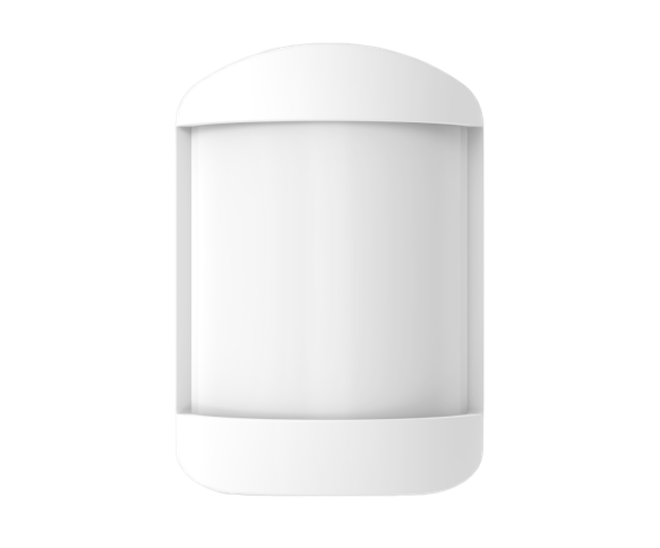 Catch intruders before they damage your home.

A motion detector should simplify and secure your life, not make it more complicated. That’s why we designed our motion detector to fit your lifestyle. It detects human heat signatures and ignores pets.

No one wants to spend hours setting up a home security system. Our motion detector takes minutes to install. All you have to do is follow the on-screen instructions and peel and stick your sensors. 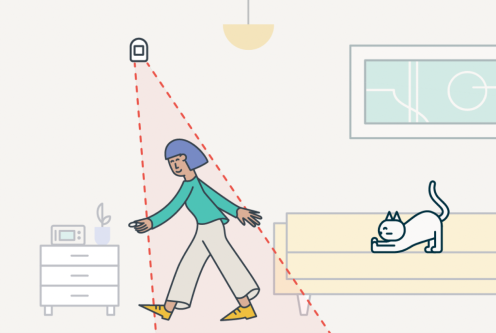 Don’t wake up in the middle of the night to the wailing of a false motion detector alarm. Our motion detector identifies human heat signatures, not shadows, bugs, or pets below 35-50 pounds. 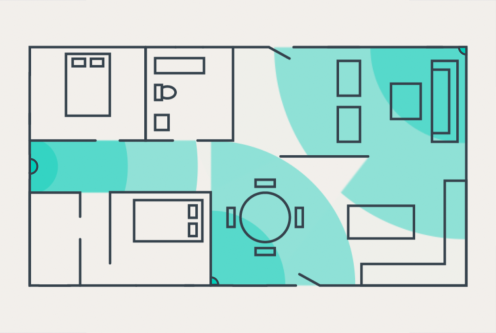 With a long-range 45 ft. sensing radius and battery life that lasts up to 5 years, this sensor gives you maximum protection for longer.

Always feel like you’re in control of your home, whether you’re snuggled up in bed or miles away. Our system is designed so you can arm the whole thing at once, or just one sensor at a time, all with a tap of your finger. 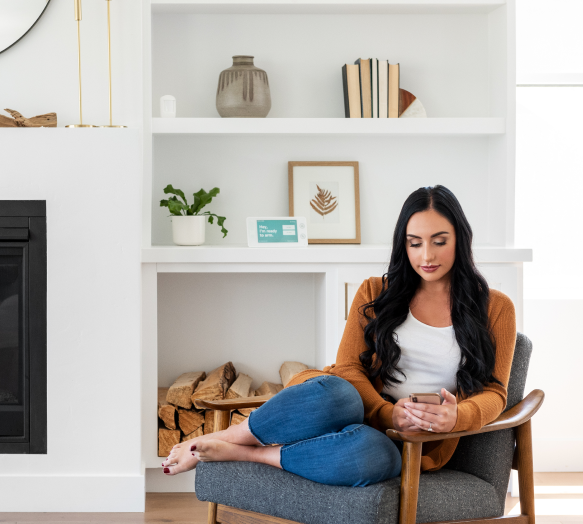 How to Install a Motion Detector - Cove

Motion detection technology is what fuels many of today’s home security devices. From motion sensor cameras to motion sensor lights, motion detectors work hard to increase your personal safety and peace of mind. When used as an independent device, a motion sensor alarm will let you know if there is someone inside of your house who shouldn’t be there. If something interrupts the detector’s sensor, it will send a signal to alert you to potential danger inside of your home, ultimately sounding the alarm.

You can use motion detectors as a part of your home alarm, at your office, or even at your vacation home to keep an eye on things while you are away. They require little maintenance and reap the huge reward of increased safety for you and your belongings. Simply put, they make your life easier.

Answer: Motion detectors use sensors to monitor movement within their field of view. Whenever a motion detector picks up on movement, it alerts your security system’s control panel to notify you of potential danger.

Motion detectors use specialized technology to detect potentially hazardous movements. Cove's motion detectors use an infrared sensor in order to detect the body heat of the intruder. Here’s a basic rundown of how each type of motion detection works in the context of motion detector sensors. The heat signatures and radiation which is emitted from the human body allow for our wireless motion sensor to function if someone enters the room. When you have active sensors in a room, you will be alerted to the immediate change of infrared energy.

Heat Detection Sensors. Motion detectors that use heat detection sensors monitor the temperature within their field of view. If the sensor detects a sudden rise or fall in temperature, like, say an intruder crossing through your kitchen, it will send an alert to your security system’s control panel to notify you of the possible danger.

Signal Blockage Sensors. Another type of motion detector uses blocked signals to determine if there is movement. These detectors monitor when objects physically block the signal of a passive infrared sensor that is emitted from the motion detector device.

Light Change Sensors. Light change detectors track ambient light to detect movement. If the device sees a sudden or large enough change in lighting, like a person’s shadow crossing in front of the device’s field of view, it is interpreted as movement.

Contact Sensors. Based off of their name alone, it is pretty easy to figure out how contact sensors work. Usually placed on doors or windows, contact sensors activate when the direct signal from one part of the sensor to the other is interrupted. This happens when the door or window they are fastened to is opened.

When it comes to home security, motion detectors are the centerpiece of any good system. A motion sensor will communicate with your home’s security panel so that you can receive notifications about potential threats to your home. And, as mentioned, many home security devices are powered by motion sensor technology. Whether a motion detector is powering your lights, preserving the power in your camera until it is needed, or passively watching over a certain room in your home, motion detection is one of the most important things you can have.

Anything that moves can set off a motion sensor.

Simply put, anything that moves has the potential to trigger a motion sensor. That is where they got their names, after all. This means that the possibilities for setting off your motion sensor are virtually limitless. Your device could be triggered by your family walking into a room, by a large dog walking to his or her food bowl, or by your spouse opening the door as they get home from work.

People usually deactivate their motion sensors when they are home. What can you do to prevent false alarms when your motion sensor’s only job is to monitor movement? Thankfully there is a lot that you can do to personalize your motion sensor so that it is not too sensitive. This involves being wise about where you place your devices and adjusting the settings.

Placement is an important factor to consider when it comes to minimizing false alarms. If you live alone or in an area where you are nervous about your safety, false alarms can be nerve-wracking. These false alarms are actually one reason why some people stray away from using motion detectors. The good news, however, is that you can solve the problem of unwanted false alarms by adjusting the settings of your motion detector.

If you cannot see anything in front of your sensor, try temporarily moving it to a new location. If it continues to misbehave while the sensor is in a new location, you can know that the problem was not the sensor’s environment, but that there is something wrong with the actual equipment. And if the device works normally when the sensor has been moved, then you’ll know you need to investigate a little bit more. Check to see if your sensor is directly facing a window or glass door and the infrared heat is being detected by the sensor.

The next step is to adjust your sensor’s settings. Your sensor can be customized so that it only turns on when things move at a certain distance from the sensor. (Adjust the “SENS” pin on the back of your motion sensor from “HI” to “LOW”.

Say you have a dog that is constantly setting off your motion detector. You can adjust your sensor’s settings so that it doesn't turn on unless something heavier than 55 pounds passes within its field of view. This is adjusted by moving the “PET” pin from “35 lbs” to “55 lbs” on the inside of your motion sensor.

If none of the above works to get your sensors behaving as they should, it might be wise to replace your motion sensor with a door/window sensor and a glassbreak detector.

When choosing a motion detector, it is helpful to ask yourself why you want to install this type of device inside of your home. Considering what you are looking for in a motion sensor can help you compile a list of features that are important for the device you choose to purchase to have.

There are a lot of motion detectors on the market. Your safety is not something that should be taken lightly, so it is of the utmost importance that you select a top-notch detector to install inside of your home.

Take a look at the pros that the device has to offer. Some benefits to look for include simple installation, long battery life, self testing, and lifetime warranty. Another amazing pro is customizable options and alerts. With this feature, you are free to choose the method of alert delivery that works best for your lifestyle, whether it be phone calls, text messages, or push alerts. Make sure that the motion detector you choose (whether it is a Cove device or comes from another company) fits your needs.

Avoid expensive motion detectors that come at a hefty price. Find one that comes at a reasonable price so that cost can be another pro on your motion detector checklist. When considering price, investigate whether the company you are purchasing your device from requires a reasonable or out-of-budget price.

Install motion detectors in the corner of a room at a height of about 6 to 8 feet above the floor.

Once you have purchased your motion detectors, where should you put them? Proper placement makes a world of difference. A top-notch sensor that is put in an inopportune location will miss out on important movements, and a motion detector that doesn't detect motion isn’t going to be of much use to you. After all, if you are wanting to monitor your home for intruders you probably don’t want a motion detector that stares into a corner or looks directly at the ceiling.

Motion alarms are most effective when placed in large rooms such as a family, entertainment, or sitting room. This allows for the full use of the motion detector alarm to cover and protect the largest portion of your home using the least amount of sensors possible. Your alarm system is most effective when it combines the use of all sensors including a motion detector.

The most common household installation locations are highly trafficked areas and common entry points. This includes: in hallways, the family room, the basement, the living room, and near stairway entrances. Place your sensors in rooms that an intruder would likely visit, including areas where you keep your valuables. And, since these will all be highly trafficked locations inside of your home, remember that you can deactivate your sensors whenever you know someone will be home. This will reduce the number of false alarms that your motion detector sends.

Whatever room you put your motion detectors in, remember that the best placement is in the corner of a room at a height of 6 to 8 feet above the floor. This height allows your sensors to monitor movement where movement most commonly happens. Take care to point your sensor away from windows, as this will minimize false alarms. Make sure that you do not install your device upside down.